Corporate executives like to think of themselves as big thinkers.  They look at the big picture.  They look at things from 10,000 feet when the truth is they fail at following a simple list.  Now that is a bold statement and one that should get your attention.  Unfortunately it is not just a headline.  Let me prove it to you.

In 1936 Dale Carnegie wrote a book called How to Win Friends and Influence People.  In the book he outlined the 5 Step Sales Process which is listed here in the order in which each sale should be approached.

This list is well known in the business world.  Sales and Marketing professionals know and live by these rules.

Now let’s look at how well corporate America has applied this list to a new tool called the internet.  In the mid to late 1990’s companies rushed to build websites so they could tell people what they did.  Shortly after the website was complete the online shopping carts were created so companies could close deals online.  Steps 1, 2, and 3 vanished.  Somehow the sales process was truncated and started at step 4.

In 2004 the concept of Web 2.0, the Social Web, was adopted.  At its core the idea was to embrace the internet as a new vehicle for true two way communication.  Don’t just tell people what we do.  Let’s discuss things.  From here Social Media was born into an awkward unprepared world that didn’t know what to do with what it had created.  It sat disconnected at step 2 in the sales process, Rapport.

It is easy to understand why corporate executive downplay, belittle, or dismiss social media as a distraction to workers, as gossip, idle talk or rumors.   Corporate executive are focused inwards.   When it comes to personal and professional affairs there needs to be a separation.  Many human resource departments even devote space in the employee handbook to highlighting this separation.  It is up to the executives to live by and enforce these rules within their work environment.  Knowing that your in-laws are coming to visit for the weekend has very little importance to them.  This is the point where many executives stop thinking about social media.  In their minds they have addressed how social media affects them. 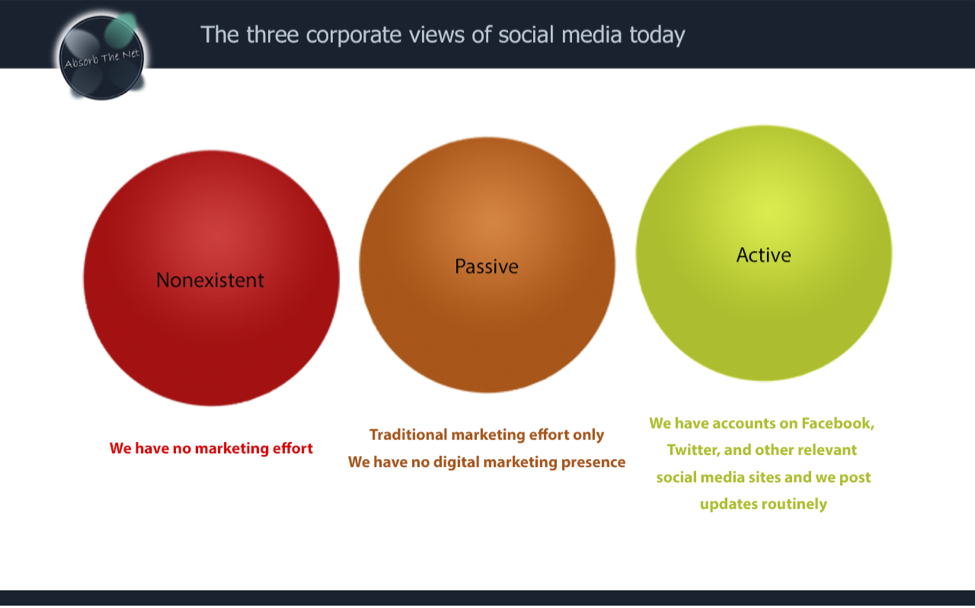 Corporation’s inward view of social media and social media’s awkward disconnected state has left it in a nonexistent or passive state in most corporate marketing plans.  Only advanced thinking companies have adopted it and have taken an active approach to it. The truth is that there is even more out there and that more is Proactive Social Media.

Marketers can’t be like all of the other executives.  Their minds need to be focused outwardly on prospects, not inwardly on the company.    Prospects are rarely within a company’s walls after all.   So it is up to the marketers to have knowledge of and understand what Proactive Social Media is all about. 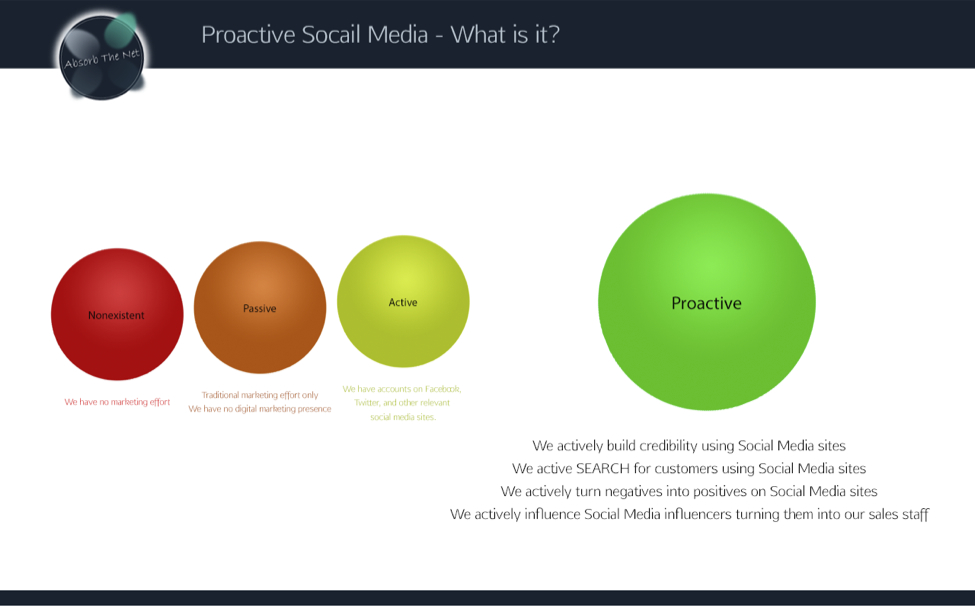 Proactive Social Media is the stance that the next wave of successful companies will adopted to complete the online sales process.

Lets walk through an example of how this works.  In our example we will use Facebook because of its popularity.  It is important to note however that the number of social media sites is always changing and can vary depending on your definition of social media.  Currently we are aware of and monitor 211 different social media site.  We will follow the same 5 basic rules of the sales process:

The first step in Social Media is a post. The post can be started by anyone. The graphic below is an example of a post we collected from Facebook. The person in this example is asking for restaurant suggestions.  People ask for product and service suggestions every day and for many types of products and services. 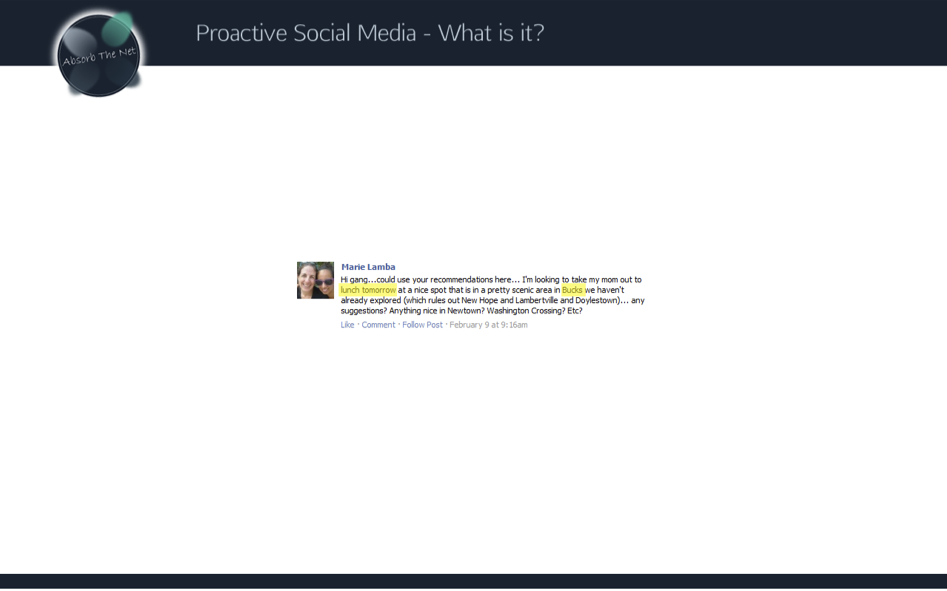 On the web prospecting can be as easy as searching.  Currently not everyone can search through all of the posts on Facebook or any other social media site.  You have to take advantage of specially written programs to do this.  Facebook has identified this as a need however as this Business Week article shows http://www.businessweek.com/articles/2012-03-28/facebook-delves-deeper-into-search.

Step 2, Rapport, is as simple as joining the conversation. 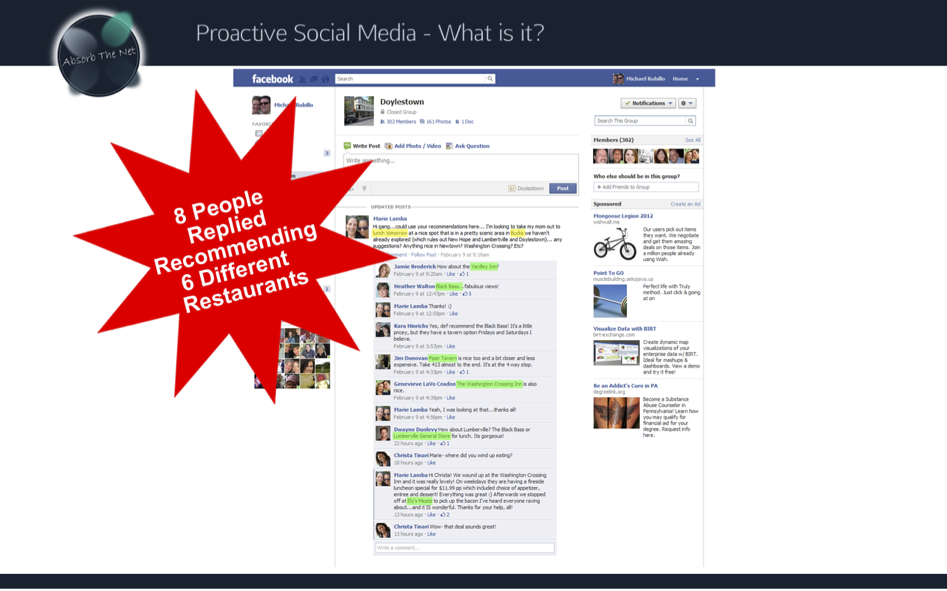 In our example there were a total of 11 replies to this persons post. 8 unique individuals replied and they suggested 6 different restaurant.

With the advanced companies today taking an active approach toward social media we find that there are many missed opportunities.  The ball is being dropped at stage 2.  Companies are not getting involved in the conversation.

If you stop to think about the situation the fact that an individual is discussing a need is only helping the sales process.  Just by talking about their need they have completed step three, qualifying the lead.  We know they are interested and we know the timing is right since the prospect initiated the conversation.  Companies are missing out on prequalified leads simply because they are not getting involved in the conversations. 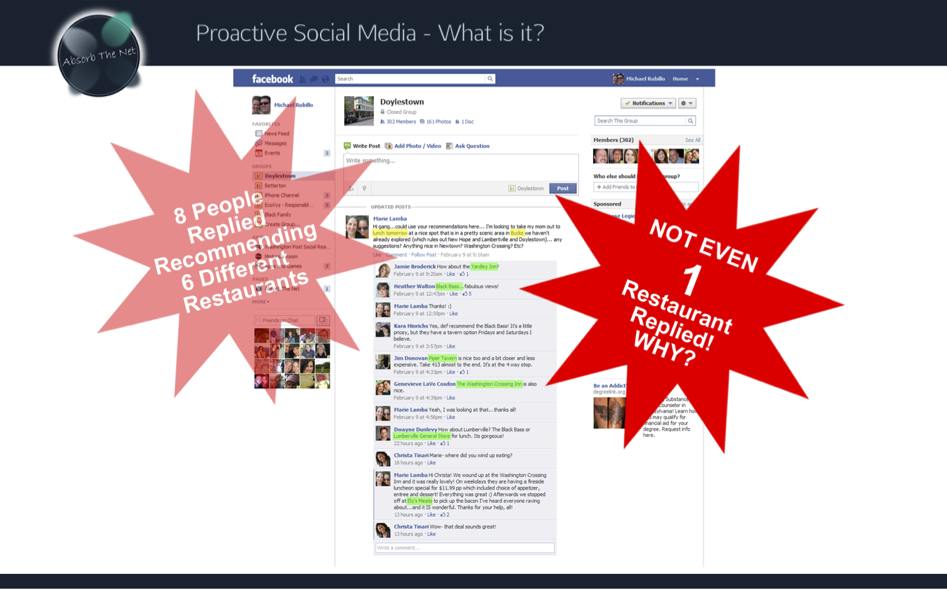 What Could Have Happened

Social Media platforms, such as Facebook, where built to allow people and companies to take advantage of the rich media world the web has to offer today. You can include text, images, movies, and hyperlinks into your responses, all of which add to your credibility within a field. The hyperlinks allow you to leverage your existent websites and shopping carts to complete steps 4 and 5 of the sales process.

What is the next step?

When I entered the business world I was told by a manager that I have always looked up to that in order to be successful I would need to live outside of my comfort zone and try new things.  He also would say in the business world you die when you stop evolving.  Given the hard economic times companies are searching for the next best thing.  They want to know what can make them more efficient, what can save them money, and how can they gain more sales easier?   Proactive social media is the answer to all of those questions.  The only question now is whether your company will adapt and live outside its comfort zone and join conversation on social media.